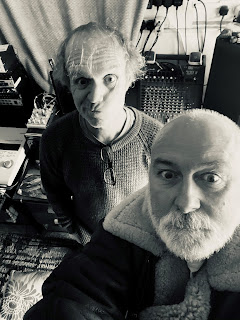 Both of Those Men Answer Our Questions

Those Men are a UK based prog art pop group. They are both quit insane, which is why I love them so much. Kindred spirits. You can find them here https://thosemen.co.uk
If you had to name one song from any genre that really speaks to you, which one would it be and why?

Martin
'I am the Walrus' by The Beatles. Its ability to become almost visual, its groove and a voice that comes from another place.

Are you a Mulder or Scully? Do you believe aliens have visited planet earth and if so what do you think they think about mankind?

Mark
I'd probably be more an Inspector Clouseau.

Martin
Mulder. Logic has its place but is by no means at all the total picture. Science and the 'other stuff' should rent a cottage away somewhere and have a good old chat.

Mark
I think they visited us a few thousand years ago and probably thought we were a bit primitive so they might have given us a few tips.

Martin
I think that we will all be witness to this soon. 'They've found stars in the hole in the sun'. It feels as if everything is moving towards an unblanketing of these 'alien' questions . A bit like when Graham Chapman used to come into the Python sketches and stop them , saying it was getting too silly. It depends how 'logical' They are. They may admire our ability to be illogical. Opposites attract and all that.

What was the happiest day of your life and why?

Martin
I think I was about 15. I remember one day feeling everything opening up. As if a painting I knew well suddenly expanded and presented itself with a myriad more nuances. That day fed into all the others after such as daughter birth and partner joy.

If “God” (whatever your idea is on that) were stood before you now, what one question would you ask him/her and why?

Mark
If there is a God I'd ask it if it did create humans then why do we never learn fully from our mistakes?

Martin
When are we returning to purity please God? I'd like to know so I can spend my time up until then living out of it.

As an expressive artist in the music industry, how does the state of the planet make you feel?

Mark
As a non driver and passionate recycler I'm very angry and worried about the state of the planet.

Martin
There is so much to write about resulting from the confusions and delights we all create. The interplays and fluxing of emotions and moods seem to manifest in some of the most peculiar ways. Every day something I or we do never ceases to amaze me. Mother Earth is the playground we act it out in. We need to keep an eye on that .

Do you think as a person of some influence that there is a duty on us to help influence humanity for the better?

Mark
Yes, absolutely and at every opportunity.

Martin
Self reflection is the way forward for me. Get your own house in order. A life long task but one worth starting at any time. When you can see ,feel and witness your own faults there seems to be a positively pervasive influence springing out of this. Not sanctimonious or lecturing. Just happening.

If you were stood before the leaders of the world, what would you say to them?

Martin
Do you have a look inside yourself before you make your work decisions? I would also ask them what the power and responsibility feels like in their work life.

And finally my last question is in fact one written by Freddie Mercury in the song “Is This the World We Created”?

Mark
We didn't create it but we seem to be very good at hastening its and therefore our own demise.

Martin
Yes in terms of how we live out our destinies but no in terms of the Earth's physical soul. We are puny in comparison to that. 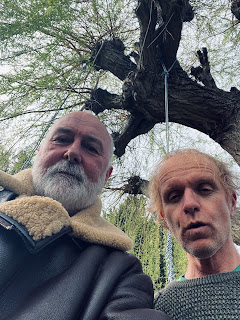 Those Men have a new album out on 22nd April!
Pre-Save it here https://orcd.co/thosemen_fecundness