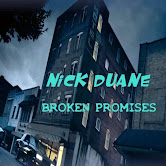 Getting to know Nick Duane...

Sitting somewhere between the edge of rock and the catchy appeal of indie and singer-songwriter music, Nick Duane is an artist who stands out for having put together a signature sound that is innovative and creative. In fact, it does not feel like a stretch to say that Nick’s music could be considered proof that great songs can be so much more than just flashy studio productions that only aim at capturing the short attention span of a narrow audience. Nick’s blend of indie rock has a sound that combines “old school” vibes with unique new ideas, at times classic and timeless, at times innovative and futuristic.

Hailing from the landscapes of Providence, RI and the surrounding New England scene Nick Duane has been making music for decades. He has played both Bass and Guitar with several New England regional acts and writes and records his own songs that you can find at all the usual locations including Spotify, iTunes, Amazon and Pandora and YouTube.

Nick has currently produced a slew of singles and released 4 Albums
('Confessions', 'When We Said Goodbye', 'Before The Storm', 'Broken Promises') and 1 EP ('Remake Remix').

One of the founding members of the Backslap Blues Band..(the first band to appear at the now legendary Providence, Rhode Island nightclub,
'Lupos Heartbreak Hotel')
Former member of the rock band and WBRU battle of the bands winner 'DC Tenz'
Limelight Magazine Music Awards, Singer-Songwriter of the Year (Runner Up Award)

He is also a member of ‘Cold Shivers’ music collaboration and is featured on their 5 song EP ‘This That and No Other'.

This Album has thirteen tracks, I’ll be reviewing two out of the thirteen that I liked best.

The first track that I really like just so happens to be the first track on the album. The tracks name is “Anything” this track starts out with some amazing drumming along with bright guitars that introduces the vocalist Nick Duane singing, “Wondering what this union was...it all fits together much to conveniently...” with a voice that reminds me of David Bowie. At the verse the guitars play brightly as Nick sings,”Heart racing as we get through the night…. Hell bent on reaching… Some other side of this, with you my love” this is a track about a love that can defeat anything that this world throws at them. Might of fact Nick even states that in the chorus of the track. Wow, that break has a sort of synth wave feel to it, nice touch! It is also a nice touch with the vocal doubling. I like the way this song sounds, with bright guitars and a punchy drum beat that put together gives you the feel of a David Bowie track.

The Second track I reviewed is the twelfth track..”Tears Falling” This track starts out so smooth with rhythm guitar play along side the drums and bass as the lead guitarist plays this amazing rift again setting the stage for the vocalist Nick Duane to tell the story. Nick  started out saying, “The day winds down… The sky had a strawberry moon..” This track is a breakup track a track where you long for a person that you've been with and in a sudden they are gone leaving you missing them. The break is absolutely beautiful with the change up the guitars playing in harmonics. The drum and bass has you tapping you toes. This track is just phenomenal. It has to be my favorite track on this album.

In conclusion, Broken Promises by Nick Duane is a really outstanding album. Tracks of Love to Tracks of heartache.  With his David Bowie feel to his tracks really makes this album fantastic. This is an album for all walks of life.